The Keeper and the Rune Stone (The Black Ledge Series #1) by Paige W. Pendleton

Centuries ago a group of Elves committed an unholy ritual. But the ritual was a spectacular failure. It transformed the Elves into the Noctivagi - the beings we know as vampires.

Striving to maintain a fragile peace, the ancient Elves and Dwarves negotiated an Accord, which they've renewed every year on the Summer Solstice. The ceremony depends on the magical Rune Stone, but it's missing. If it is not found—and quickly—the consequences could be dire, and not just for Elves and Dwarves.

Four children, Rob, Jack, Eleanor, and Flora, stumble into a world of magic and mayhem when they move into Black Ledge, the old estate on the Maine coast, and discover they aren't the only ones who live there. 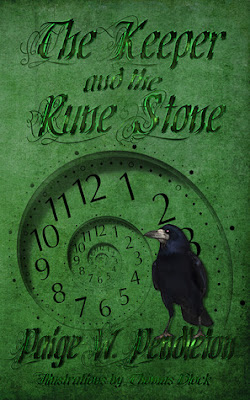 I was given a copy of this book on kindle by the author in return for an honest review.

I love how the cover actually relates to the book, and how mysterious it is (the colours really go with the colour scheme of the blog - its as if I was meant to read this book... xD)! The detailed map at the start of The Keeper and the Rune Stone was another element that made the book much more unique than others i`ve read - it helped that it was pretty as well!

Right from the start The Keeper and the Rune Stone was very easy to get in to, as it was very fast paced. And, although it is not something I would usually pick up, I was sucked into the fascinating world of Dwarves Light Elves and Dark Elves (and those are just a few of the beings in the book!).

It was certainly a nice change to read about such interesting creatures, as not many fantasy novels out there at the moment include beings like Elves or Dwarves.
I especially loved Ms Pendleton`s take on vampires, instead calling them Noctivagi - boy is that hard to pronounce - Elves that performed a ritual, which involved drinking the blood of a sacrifice or two....

Which leads me on to my next point. I expected, after reading around 50 %, The Keeper and the Rune Stone to be very, very tame in the violence department. I was, however, pleasantly surprised by how dark things got near the end of the book.

My favorite characters were definitely Gunnr because he was so mysterious and Camedon with his strange yet hilarious sense of humor. However, although the book is from the four siblings point of view, they do seem a bit too mature to be children, but I still loved Eleanor.

Although The Black Ledge series seems to be aimed at children, I would recommend it to everyone!

Goodreads: Want to read?
Posted by NomBooks at 19:14