Angelfall (Penryn & the End of Days #1) by Susan Ee

Date Released: 21st May 2011 (Paperback released 23rd May 2013)
Pages: 283
Blurb: It's been six weeks since angels of the apocalypse descended to demolish the modern world. Street gangs rule the day while fear and superstition rule the night. When warrior angels fly away with a helpless little girl, her seventeen-year-old sister Penryn will do anything to get her back.

Anything, including making a deal with an enemy angel.

Raffe is a warrior who lies broken and wingless on the street. After eons of fighting his own battles, he finds himself being rescued from a desperate situation by a half-starved teenage girl.

Traveling through a dark and twisted Northern California, they have only each other to rely on for survival. Together, they journey toward the angels' stronghold in San Francisco where she'll risk everything to rescue her sister and he'll put himself at the mercy of his greatest enemies for the chance to be made whole again. 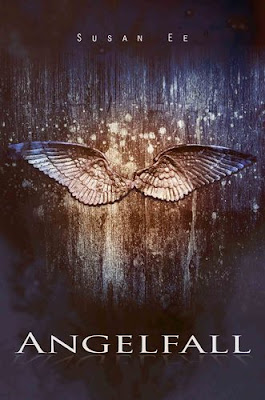 I love this book so much that i have three copies - two in paperback, and the other on my kindle, and I’m not ashamed to admit it! I remember when this was just a 77 p book on kindle, now it is sold in paperback with a potential movie on the way. I feel like a proud mother. 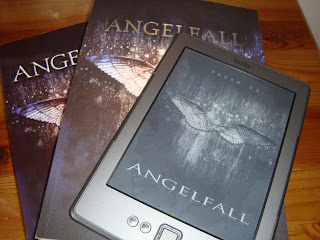 The start reminded me a little bit of The Hunger Games - a girl trying to save her younger sister - which is part of the reason why I bought it. And it didn't disappoint. After just the first few pages I was sucked in. I've found with a lot of dystopian books that they're either quite confusing because the author doesn't explain it very much in terms of world building, or they explain it too much and I get bored. But with Angelfall that wasn't the case.

Whether you prefer paranormal romance or science fiction, this book really does have the whole package. There is plenty of action to keep you interested, just a hint of romance (for now) and big dollop of comedy as well! Seriously, this book actually made me laugh out loud so many times, and I hardly ever laugh at books.

Definitely the easiest 5 stars i have ever given.

“Why were the other angels attacking you?"
"It's impolite to ask the victim of violence what they did to be attacked.”

“Here, I’ll show you how to use it. Let me see your foot.”
“That’s a pretty intimate demand in the angel world. It usually takes dinner, some wine, and sparkling conversation for me to give up my feet.”

“So long as you don't bleed in the shape of wing joints, you should pass for human. Oh, and don't let anyone pick you up. They'll know you're not right as soon as they feel how light you are."
"I'll be sure not to let anyone but you carry me in her arms.”

“I'm not moping," I whisper back.
"Of course you're not. A girl like you, spending time with a warrior demigod like me. What's to mope about? Leaving a wheelchair behind couldn't possibly show up on the radar compared to that."
"You've got to be kidding me."
"I never kid about my warrior demigod status.”


Goodreads Link: Want to read?
Posted by NomBooks at 14:16