Date Released: 8th January 2013
Pages: 341
Blurb: Aria has struggled to build a life for herself outside Reverie. It hasn't been easy adjusting to life in the wilderness but that struggle has been worth it with Perry by her side.

But Perry has other challenges. His people are looking to him for answers. Answers about what happened to his nephew and what's happening to their world. And they don't trust the priviledged Aria, one of the enemy, in their midst. 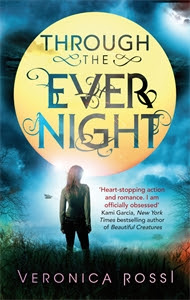 The start of Through the Ever Night drew me in immediately, as it started almost exactly where Under the Never sky ended. However after the beginning, it took me a while to get into again. I found a big chunk of this book very dull, and there wasn't very much action.
I understand that there cant be action on every page, there has to be balance, but it was just SO SLOW.
Of course, there has to be a (short and verbal) fight over Perry between Aria and Brooke.

So that made me want to scream as well.
Also, if you were confused about Aether, and what the hell it is, in the last book, then fear not, because it is explained a little bit. I mean, I still don't understand it, but maybe i'm just...slow.

Don`t worry though, it does pick up again (hurray)! Just when I was starting to want to punch Perry (who am I kidding, I always want to punch Perry) ... something happened! I wont say what, because I don't want to ruin the book, but it was very exciting!

To be honest, I was already sick of Perry and Aria`s relationship by the first page of Through the Ever Night,  I just find them so unrealistic, and Perry really creepy, so I was pleased that Aria starts to take matters into her own hands...

Thankfully, Roar was still a main character in this book, because he is amazing! I know i shouldn't, but I am secretly hoping that Roar and Aria will get together...somehow. I cant help it, i`m just that much of a rebel!