The Keeper and the Alabaster Chalice by Paige W. Pendleton

Black Ledge is inhabited again, but not everyone in the Realm is pleased. As the Driscolls settle into their new home they meet magical Beings, discover secrets, and exasperate the Elven Guard. They’re having a great time.

Charm turns to alarm when they meet Doris, the Acadian Water Witch, who's removed the Alabaster Chalice from its watery grave. The Noctivagi, drawn by the artifact's Water Magyk, seek the Chalice for their own nefarious purpose, and mayhem ensues.

Eleanor, Rob, Jack, and Flora fight time and tide to return the Alabaster Chalice to the Undine Prince before the darkness steals it 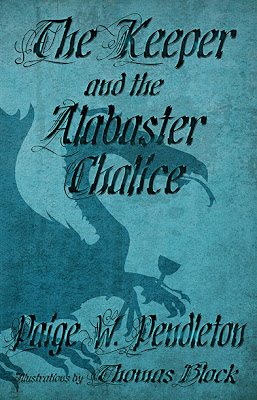 I was given a copy of this book on kindle in return for an honest review.

I was very pleased when I started The Keeper and the Alabaster Chalice that it was just as fast paced and easy to get into as the first book. In fact, this book has much more action and a lot more going on than in the first book. Straight away, the mystery surrounding the Alabaster Chalice intrigued me, and I found myself feeling much more involved in this book rather than the first.

To be honest the whole plotline of The Keeper and the Alabaster was much more interesting, but it would have been nothing without my favourite characters - Gunnr and Eleanor. It was sweet how they both looked out for each other and I absolutely love their conversations. And Gunnr and Camedon help Eleanor to find out more about her powers, which was one of the highlights of the book for me because it was just so damn cool. As well as that, its nice to find another strong female character that stands up for herself.
Mary Sues are so 2012.

There are also several delightful new characters, including a dragon called Nob (yes, i admit to giggling a little bit at the name at first, but he actually does turn out to be fairly scary) and a seal called Seaton that I couldn't help but get a slightly British feel from...

And finally I would just like to add that as well as an engaging story, there were a few charming drawings of some of the scenes/characters, drawn by Thomas Block, which really did bring the story to life.

I will definitely be waiting eagerly when book 3 is released.

Goodreads: Want to read?
Posted by NomBooks at 22:08