When we moved to West Virginia right before my senior year, I'd pretty much resigned myself to thick accents, dodgy internet access, and a whole lot of boring.... until I spotted my hot neighbor, with his looming height and eerie green eyes. Things were looking up.

And then he opened his mouth.

Daemon is infuriating. Arrogant. Stab-worthy. We do not get along. At all. But when a stranger attacks me and Daemon literally freezes time with a wave of his hand, well, something...unexpected happens.
The hot alien living next door marks me.

You heard me. Alien. Turns out Daemon and his sister have a galaxy of enemies wanting to steal their abilities, and Daemon's touch has me lit up like the Vegas Strip. The only way I'm getting out of this alive is by sticking close to Daemon until my alien mojo fades.

If I don't kill him first, that is. 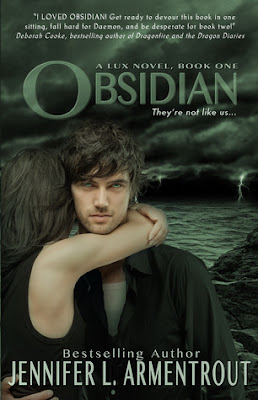 Can I just start by saying that I feel like the only person who doesn't like the cover? I mean, the background is nice, but the guy just creeps me out a little bit... Sorry!
Anyway.

Yay, its in first person! I found Obsidian very easy to get into and i immediately loved Katy because she always stood up for herself and was hilarious at the same time - and she blogs about books! SHE UNDERSTANDS! 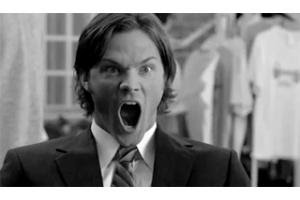 Enter Daemon. Whenever I was reading Daemon`s conversations, I ended up doing one of three things: cringing, laughing or wanting to punch him in the face. I know that the whole point of Daemon was that he was supposed to be a "bad boy" type guy but... gah! He could be so annoying (yet funny), and treated Katy like crap most of the time!

I was starting to hate Daemon, but he redeemed himself at the end of the book. I really loved the second half of the book, as there was a lot more action, and the "Katy and Daemon" ending was brilliant...

I guess Obsidian is supposed to be science fiction, what with it being about aliens and all, but I found that the main focus of the book was the romance between Katy and Daemon. So if you don't like romance, then this book probably isn't for you.


Quotes:
“I don't think he meant to kiss me," I said finally.
"What? Did he slip and fall on your mouth? Those things are known to happen.”

“You haven’t locked yourself in any rooms or rocked in any corners, right?”
I rolled my eyes and began walking again. “No Daemon, but thanks for making sure I’m mentally sound and all.”

“Why are you such an ass?" The words came out before I could think twice.
"Everyone has to excel at something, right?"