Thanks to his alien mojo, Daemon’s determined to prove what he feels for me is more than a product of our bizarro connection. So I've sworn him off, even though he’s running more hot than cold these days. But we've got bigger problems.

Something worse than the Arum has come to town…

The Department of Defense are here. If they ever find out what Daemon can do and that we're linked, I’m a goner. So is he. And there's this new boy in school who’s got a secret of his own. He knows what’s happened to me and he can help, but to do so, I have to lie to Daemon and stay away from him. Like that's possible. Against all common sense, I'm falling for Daemon. Hard.

But then everything changes…

I've seen someone who shouldn't be alive. And I have to tell Daemon, even though I know he’s never going to stop searching until he gets the truth. What happened to his brother? Who betrayed him? And what does the DOD want from them—from me?

No one is who they seem. And not everyone will survive the lies... 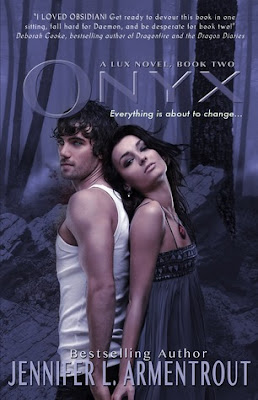 Yet another cover that I just don't like. However it is a... nice shade of purple...
Onyx picks up pretty much exactly where Obsidian left off - Katy is still amazing and Daemon is still very hot
annoying.
Miss Armentrout really did out do herself with Onyx, she had me laughing - out loud! I know, I know, calm yourself. Your thinking to yourself; there is no way that Onyx is better than Obsidian. There is no way that Onyx can be funnier than Obsidian or that I will magically start shipping Daemon with Katy, because, lets face it, he really is quite a douche and a jerk and a big smell poo and Katy deserves better *cries*.

The only way I can think to describe it is that everything just gets... so much better. And it was during Onyx that I really did start to LOVE Daemon and Katy together.
Sure their weird on-off not really a relationship relationship was frustrating, but I kind of loved it

To be honest the only thing that stopped me giving this book 5 stars was the angst. Maybe it was because I love this book so much, but I cant believe it took me reading Onyx for the third time to realize how much angst there is in this series.No joke.

Don`t worry though, near the end of the book there is a very sudden plot twist, which I did not see coming, which really helped Miss Armentrout redeem herself.

So that really bumped up the number of stars I gave Onyx (as well as the brief mention of Dean Winchester. Mmm Dean Winchester).
If you enjoyed Obsidian then definitely read Onyx.

Quotes:
“I could always give you a teaser. You bookish people love teasers, don't you?”

“Maybe they’re getting some bow-chicka-pow-wow.”
I looked at him. “Ew.”
He flashed his teeth. “She’s definitely not my type.” His gaze dropped to my lips, and parts of me quivered in response to the heat in his gaze. “But now I totally have that on my mind.”
I was breathless. “You’re a dog.”
“If you pet me, I’ll—“


“Don’t even finish that sentence,” I said, fighting a grin.”

“Humping my leg like a dog in heat every time I'm around you doesn't prove you like me, Daemon.'
Daemon clamped his mouth shut, and I could tell he was fighting back laughter. 'Actually, that's how I show people I like them.”

“Your mail could've waited." Daemon followed me into the kitchen. "What is it? Just books?"
Grabbing the OJ from the fridge, I sighed. People who didn't heart books didn't understand.”

Goodreads: Want to read?
Posted by NomBooks at 07:43