The last time she did, it was an accident, but The Reestablishment locked her up for murder. No one knows why Juliette’s touch is fatal. As long as she doesn't hurt anyone else, no one really cares. The world is too busy crumbling to pieces to pay attention to a 17-year-old girl. Diseases are destroying the population, food is hard to find, birds don’t fly anymore, and the clouds are the wrong color.

The Reestablishment said their way was the only way to fix things, so they threw Juliette in a cell. Now so many people are dead that the survivors are whispering war – and The Reestablishment has changed its mind. Maybe Juliette is more than a tortured soul stuffed into a poisonous body. Maybe she’s exactly what they need right now.

Juliette has to make a choice: Be a weapon. Or be a warrior. 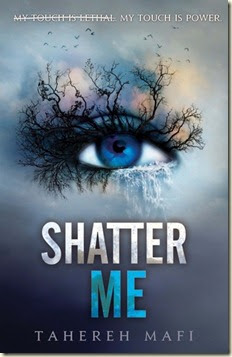 I spent absolutely AGES looking for a certain copy of this book. For some reason, they don't sell Shatter Me in UK bookshops, well not in any of the ones I checked. And then when I realized I could just buy it on Amazon, they didn't have the beautiful book cover they use in America. Look at it! Look at it in all of its amazing-ness (yes, that is a word now)! 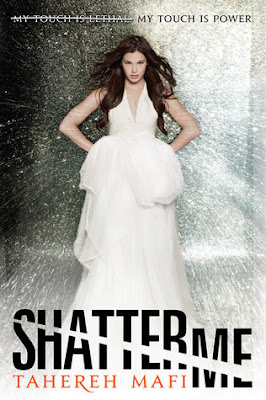 In fact, the blurb on this review is actually the blurb from the American copy of Shatter Me. Because it is better. Again.

But seriously, the UK cover is a hint about how obsessed Juliette is over eyes. If I were to go back and check, I bet that at least half the book would be about how wonderful Adam`s eyes are.

However, I was pleasantly surprised over how much I enjoyed this book. Considering how many negative reviews I had seen about Shatter Me , mainly about the writing style, I didn't really expect to enjoy it so much. Dont get me wrong, there were so many random metaphors and similes where I was like:

But I tried to ignore the really weird ones, and read on.

Be warned! If you do not like romance, and are hoping for a dystopian/science fiction book, then do not read this. Sure, it is classed as a dystopian, but it is more of a romance book.
On that note; Team Warner!

Goodreads: Want to read?
Posted by NomBooks at 11:35