Date Released: 7th February 2012
Pages: 384
Blurb: Aria is a teenager in the enclosed city of Reverie. Like all Dwellers, she spends her time with friends in virtual environments, called Realms, accessed through an eyepiece called a Smarteye. Aria enjoys the Realms and the easy life in Reverie. When she is forced out of the pod for a crime she did not commit, she believes her death is imminent. The outside world is known as The Death Shop, with danger in every direction.

As an Outsider, Perry has always known hunger, vicious predators, and violent energy storms from the swirling electrified atmosphere called the Aether. A bit of an outcast even among his hunting tribe, Perry withstands these daily tests with his exceptional abilities, as he is gifted with powerful senses that enable him to scent danger, food and even human emotions.

They come together reluctantly, for Aria must depend on Perry, whom she considers abarbarian, to help her get back to Reverie, while Perry needs Aria to help unravel the mystery of his beloved nephew’s abduction by the Dwellers. Together they embark on a journey challenged as much by their prejudices as by encounters with cannibals and wolves. But to their surprise, Aria and Perry forge an unlikely love - one that will forever change the fate of all who live UNDER THE NEVER SKY 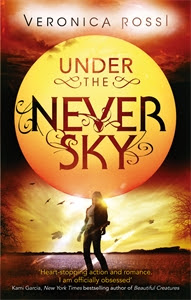 I was reluctant at first to read this, despite the many positive reviews of it on Goodreads, partly because it sounded a bit... samey, with all the other dystopian novels going around at the moment and partly because Kami Garcia, co-author of  Beautiful Creatures (which i hated), liked it.

But in the end i was convinced to read to this by three things: the beautiful cover, the cool title and the fact that i could borrow it from my friend who assured me it wasn't "that bad".

The first 60 pages alone made me want to stop reading. Aria was annoying. Perry was annoying. Talon was annoying.You get the gist of it. But then it just stopped - well, kind of, i still find Perry extremely irritating but i just had no opinion on Aria. I didn't like her, or hate her. She was just there. 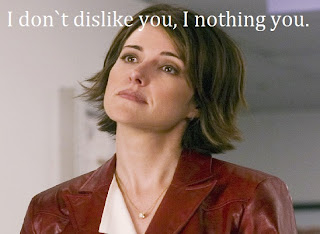 There was action, romance and... cannibals.

Whether you liked this book or hated it, the ending will almost certainly make you want to read the next book.